When we were in the process of migrating our SCCM 2007 hierarchy to the newly installed SCCM 2012, we encountered around 150 revoked clients that were being denied registration. While the vast majority of the agents functioned properly, these particular agents remained unable to register with SCCM 2012.

We checked all the settings for SCCM 2012: boundaries, Management Point, and PKI among others. All our configuration was correct. Moreover, the issue was not restricted to a specific location since the problematic clients were distributed over numerous secondary sites which contained perfectly functioning clients as well. All the workstations come from a single master image without the SCCM agent installed which puzzled us even more. We examined the ClientIDManager.log on a malfunctioning agent and we saw these errors:

The server was rejecting the registration request. No further details were present otherwise so we checked the server logs. We found the following behavior being logged in MP_RegistrationManager.log on the primary site’s management point:

That was odd since these clients were new and we have never revoked any certificates. We generated a new GUID for the agent by deleting %windir%\smscfg.ini and restarting the SMS Agent Host service. The same behavior remained and the server still rejected the registration for the new GUID with the same error.

Due to one of the log entries above, we suspected that the self-generated certificates had somehow expired but they were still valid:

Nevertheless, we again deleted smscfg.ini and we used SMS Toolkit to run CCMDelCert.exe on a problematic workstation. We restarted the SMS Agent Host service but the issue remained. We tried again but this time we deleted the agent and reinstalled it after the cleanup, the issue persisted.

Following that, we selected a secondary site that contained problematic agents and we performed the following:

We reinstalled the secondary site and pushed all agents. The same issue remained and problematic clients appeared again. Even though all the troubleshooting steps generated new GUIDs, the server was still rejecting them with the same error message. The root of our revoked clients problem had to be coming from the primary site and its database.

We went back to the primary site and we connected to the SQL instance for the SCCM database and ran the following:

This GUID belonged to one of the problematic clients. The query returned no results however, indicating that it does not exist in the database at all. We checked the database for any revoked clients by running:

The query returned results indicating that some clients have been revoked by the server. That was odd since, as I mentioned earlier, we never blocked or revoked any client or certificate. We backed up the SCCM database and ran:

The query updated a number of records that matched the number of clients we were having problems with. After a few minutes, the clients started trying to re-register and they were finally able to do so:

Caution: directly modifying the SCCM database is not recommended nor supported by Microsoft and should be extensively tested. Only perform update queries after taking a full backup and when advised to do so by Microsoft support personnel.

This post is part of a series of posts aimed at creating and managing a Hyper-V Cluster. This part will deal with the initial installation as well as a part of the configuration.

As a best practice, Microsoft recommends that Hyper-V be deployed on Windows Server Core to minimize overhead and reduce the attack surface. Starting with Server 2012, the GUI can be removed or installed on demand. This part of the guide aims to be on the easy side, as such, we will start with the GUI installed for the initial configuration and remove it later on. An advanced guide using Server Core directly from the start with appropriate PowerShell commands will follow later on.

This guide assumes that you have already checked your various hardware components as being certified to run Microsoft Failover clusters. Some examples to check could be the SAN firmware, fiber switches, fiber HBAs, latest certified BIOS/UEFI, NICs firmware, device drivers, SAN compatibility with ODX, etc. Verify this information with your vendors.

For starting setup, it is recommend to boot the server you are preparing with the vendor’s latest bootable discs such IBM ServerGuide or HP SmartStart or other depending on your hardware vendor. They will contain the latest drivers for your particular hardware.

For the operating system, always aim to go with Windows Datacenter edition for the Hyper-V cluster. It will allow you unlimited guest Windows licenses:

After setup finishes, configure the following:

Disable RDP Printer redirection: This can be configured either locally via GPEdit or deployed to all the Hyper-V Cluster nodes with a GPO. The option can be found at Computer Configuration –> Policies –> Administrative Templates –> Windows Components –> Remote Desktop Services –> Remote Desktop Session Host –> Printer Redirection –> Do not allow client printer redirection. Set this option to Enabled.

Restrict Paging File: Windows dynamically adjusts paging file by default and is partly based on the installed physical RAM. High end Hyper-V Cluster nodes will usually have several hundred GBs of installed memory. Limit the paging file size to a fixed size of 16GB or 32GB. Don’t forget to click Set at the end. 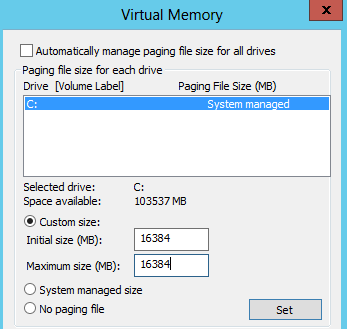 One of the most important parts of creating a Hyper-V cluster is networking. I will discuss a simple implementation in this part of the guide. Below is the minimum number of NICs that I would consider:

This is the bare minimum. If iSCSI is not used, the number goes down to 5. Nevertheless, Hyper-V is very flexible in this aspect and a Hyper-V cluster node can be ran on a single NIC if desired though this setup is highly not recommended.

I will briefly discuss the role for every interface and mention some further recommendation for it:

The trend is all about converged infrastructure these days where the physical interface for storage and network is combined. I will stick with the traditional approach for this guide and will discuss converged infrastructures in a later article. Also to note that if teaming will be used, teams needs to be created before installing and configuring the Hyper-V role. Also note that teaming disables the NIC’s RDMA capability.

For the purpose of this guide, fiber channel for storage and four NICs for connectivity will be used. Additional configuration will need to be done to the network interfaces once the Hyper-V cluster is up and running.

Management/Heartbeat: Rename the interface to Management, set the IP, gateway and DNS. Make sure that this NIC is listed first in the Network Bindings order by going to Network Connections -> Change adapters settings -> Advanced -> Advanced Settings. DNS should use this NIC for dynamic registration. Client & File and Printer Sharing for Microsoft Networks should be set: 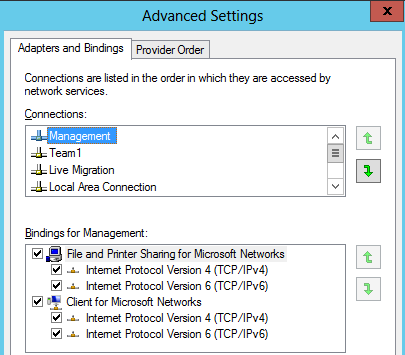 VM Network: We will use two teamed NICs for this functionality. From Server Manager, open NIC Teaming, select the two NICs for this purpose and create a new team. Set it to Switch Independent, Hyper-V Port: 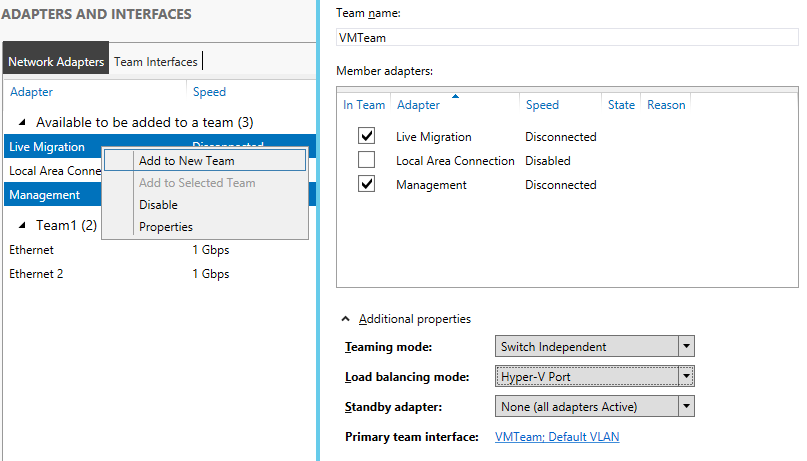 In this mode, Hyper-V will load balance the traffic between the two physical interfaces based on the VM’s MAC. Preferably, connect each NIC to a different physical switch for fault tolerance. Switch ports should be trunk ports and Hyper-V will tag packets with the appropriately configured VLAN. Note that some switches support switch stacking which combines several physical switches into one logical switch. This allows you to use one of the Switch Dependent modes (Static Team or LACP) on two separate physical paths, giving you fault tolerance as well as link aggregation. Discuss this with your network administrator.

Set an IP address for the team interface. Rename the interface to a more descriptive name. DNS, gateway and DNS dynamic registration should not be set. Moreover, NetBIOS, File and Printer Sharing and Client for Microsoft Networks should be disabled. Virtual Machine Queues should be enabled. Either set it from the NIC’s device properties in Device Manager or by using the PowerShell cmdlet:

Once VMQ is enabled for all the individual physical adapters that are part of the team, it will be enabled automatically for the teamed interface. Confirm it is enabled by running Get-NetAdapterVmq. At this point, it may show that VMQ is still disabled, this is normal since we have not installed Hyper-V yet. The correct status will be reflected once the Hyper-V role is installed:

For now, let’s cap Live Migration traffic to avoid saturating the link.  We will combine Live Migration with CSV functionality for this guide. Since we are using just one NIC for this functionality, complete high availability is reduced. This is a Microsoft supported scenario though.

Set-SmbBandwidthLimit in Server 2012 R2 is a new cmdlet and can limit SMB traffic for Live Migration, among other SMB traffic. Since the link is 10 Gbps, we will limit the traffic to 50% of that:

If the cmdlet is not available, install SMB Bandwidth Limit feature from Server Manager. For Hyper-V Clusters running on older versions of Windows Server, QoS policies can be used to achieve throttling as discussed here.

Set an appropriate IP address for the interface. Rename it to a more descriptive name. DNS, gateway and DNS dynamic registration should not be set.

That’s it for this part. In the next part, I will finish the configuration and install the required roles and features. Following that, we will create and configure the Hyper-V Cluster. The website has been launched and I will be sharing here tips, solutions, guides and general information about several topics in IT infrastructure. Feel free to checkout My Profile and connect with me.